Most likely you or someone you know has allergies. The telltale itchy, puffy, watery eyes and red, stuffy nose signal changes in the seasons in homes and workplaces across the country. What these people suffer from is allergic rhinitis, or hay fever. The medical name for this condition refers to stuffy and itchy nose ("rhin-"), the most common symptom.

Hay fever is an allergic reaction. It is your immune system's response to foreign material in the air you breathe. Hay fever usually refers to allergies to outdoor, airborne materials such as pollens and molds.


Hay fever, like all allergic reactions, is caused by allergens, foreign "invaders" that enter your body by inhalation, by swallowing, or through your skin.


What are the symptoms of hay fever ?

Symptoms of hay fever may start at different times of year, it depends on what substance the patient is allergic to. If a person is allergic to a common pollen, then when the pollen count is higher his symptoms will be more severe.


Severe Symptoms May Include:

People with asthma may find that when hay fever symptoms emerge their wheezing and episodes of breathlessness become more severe. A significant number of people only have asthma symptoms when they have hay fever.


What Are The Causes Of Hay Fever ? 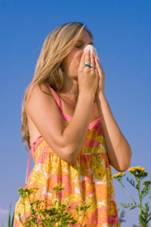 Hay fever occurs when the immune system mistakes a harmless airborne substance as a threat. As your body thinks the substance is harmful it produces an antibody called immunoglobulin E to attack it. It then releases the chemical histamine which causes the symptoms.

There are seasonal hay fever triggers which include pollen and spores that will only cause symptoms during certain months of the year.


The following are some examples of hay fever triggers:

What Are The Risk Factors For Hay Fever?

A risk factor is something that increases a person's chances of developing a disease or condition. Below are some risk factors for hay fever:


Experts believe that the last three risk factors are linked to childhood infections. If a baby and/or small child has had fewer infections, there is a greater risk of autoimmune problems.


How Is Hay Fever Diagnosed ?

Generally, doctors can make a diagnosis based on the symptoms, which are usually fairly obvious. The doctor will also ask questions about the patient's personal and family medical history, and how signs and symptoms have been dealt with so far.

A blood or skin test can be followed up to identify which substance(s) the patient is allergic to.

What Are The Treatment Options For Hay Fever ?

There is a vast array of OTC (over-the-counter) and prescription medications for treating hay fever symptoms. Some patients may find that a combination of two or three medications works much better than just one.

It is important for parents to remember that some hay fever medications are just for adults. If you are not sure, talk to a qualified pharmacist, or ask your doctor.