Myringotomy is a surgical procedure during which an incision is made in the eardrum (tympanic membrane) to allow a fluid-filled middle ear to drain. Ear tubes are usually inserted in the ear to allow fluid to continue to drain (tympanostomy). This procedure is often recommended for children between the ages of six months and 2 years who suffer from recurring ear infections (otitis media) or hearing loss due to fluid buildup.

Inserting The Tubes Has A Number Of Potential Benefits, Including : -

Patients who undergo myringotomy feel little or no pain during this outpatient procedure, and recovery is usually fast. Tubes typically remain in the ears for six to 18 months before falling out on their own. 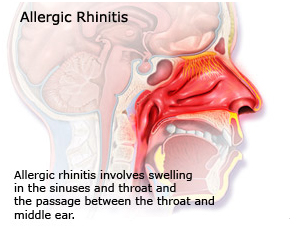 Myringotomy is an outpatient surgical procedure to create an incision in the eardrum (tympanic membrane). It is usually done before placing drainage tubes into the ears. It most often is recommended for children who have recurring ear infections (otitis media) or hearing problems due to fluid buildup in the middle ear space behind the eardrum.

The tubes help to ventilate and drain fluid out of the middle ear and into the ear canal, restoring the normal functioning of the ear. Fluid in the ear may consist of blood, pus and/or water.

A myringotomy may be necessary for many reasons. For example, severe nasal allergies sometimes cause inflammation and blockage of the eustachian tube, which connects the nose to the middle ear. The tube is designed to allow air into the middle ear and to drain fluid from the ears into the nasal cavity. When the eustachian tube fails to work properly, a number of ear conditions can develop, including infections.

A Healthcare Provider Might Suggest Myringotomy If A Patient : -

Because infections tend to affect both ears, myringotomy is almost always performed on both ears. In some cases, the effectiveness of the treatment diminishes over time. Some patients will need to have tubes reinserted within five years.

The trend in recent years for many physicians has been to wait until a myringotomy is absolutely necessary before recommending the procedure be performed on young children. This is because the eustachian tube has a tendency to widen and function better as a child grows older. This policy of "watchful waiting" does not appear to cause any problems with the health or development of the child.

Before And During The Procedure 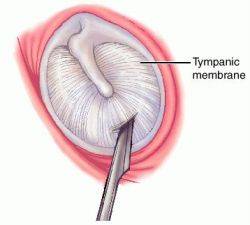 Because children make up the vast majority of myringotomy patients, special care must be taken to address the fears and anxieties that are naturally associated with any surgical procedure.

Parents should answer questions honestly, and reassure the child that they will be close by before, during and after the procedure. Children also will be comforted to know that the procedure involves minimal discomfort and that their symptoms are likely to rapidly improve after having the surgery.

Patients must not eat or drink anything (including water, candy or chewing gum) for six hours before the surgery. Anything in the stomach during surgery increases the likelihood of complications related to the anesthesia. Patients who are sick with fever or other illness the day before or day of surgery may not be good candidates for the procedure. Patients should call the physician or hospital for additional guidance.

The patient will be placed under a general anesthetic and will not be conscious during the surgery. A gas anesthetic is generally used for younger children, while older patients may receive a mixture of gas and an intravenous medication. Throughout the surgery, the patient's oxygen saturation (via a pulse oximeter) and cardiac rhythm (via an electrocardiogram) will be continuously monitored.

During the procedure, an otic speculum (an instrument used to widen an opening in the body) is inserted in the external ear canal. The surgeon will then use an operating microscope to make a small incision in the eardrum and fluid will be suctioned out. Ear tubes (also known as tympanostomy tubes, or pressure equalization tubes) will then be inserted. These tubes are shaped like a hollow spool and made of plastic, ceramic, gold, stainless steel or other materials. They allow air to flow in to the middle ear and fluid to continuously flow out. The incision made in the eardrum usually heals on its own and stitches are not needed.

The patient will then have drops placed in the ear, and cotton plugs will be inserted in the ear canal to control bleeding. The procedure is done on an outpatient basis and usually takes 10 to 15 minutes. In most cases, the entire process lasts a few hours from the time patients enter the hospital until the time they leave. Very young children or those with more significant medical problems may stay in the hospital for a longer period of time.

Patients may resume a normal diet as soon as they have fully recovered from the anesthetic. However, postoperative nausea is not unusual, so patients should eat carefully at first. Patients can typically return to normal activities, such as school or work, the day after the procedure.


After The Myringotomy Procedure


A certain amount of post-surgical drainage is normal after myringotomy. Yellow, clear fluid or mucus may drain from the ears for two to three days after surgery and it is not unusual for blood to be mixed in with the drainage. Cotton can be used to cover the ear canal and ensure that drainage does not seep out of the ear and onto pillow cases or clothing. It is important to change this cotton regularly, so that it stays dry.

Patients may also experience a slight sensation of soreness in the ears for the first several hours after the procedure. Prescription or over-the-counter pain relievers (e.g., acetaminophen) may be used to control the discomfort.

Following surgery, patients are likely to receive two different types of ear drops from their physician: Hydrocortisone and Vasocidin.

Hydrocortisone ear drops are used to prevent excess post-surgery drainage. Patients use them for the first three days after surgery, usually in dosages of three to four drops three times a day. If an infection occurs, patients may be directed by a physician to continue using the hydrocortisone drops until the first post-surgery checkup. Signs of infection include profuse, foul-smelling drainage.

Parents should contact their physician if the patient experiences severe ear pain or a skin rash. Patients may be directed to discontinue use of hydrocortisone drops and substitute with Vasocidin drops. Vasocidin drops can also be used if water accidentally enters the ear canal. It is possible a patient will not have to use Vasocidin drops at all following surgery.

Patients With Tubes In Their Ears Must Take Special Precautions Around Water, Including : -


Patients should avoid cleaning their ears after the procedure. In addition, patients should not place anything in the ear without the approval of their physician, including ear drops and ear plugs.

Those who undergo myringotomy must see a healthcare provider for regular follow-up visits to ensure the tubes are working properly. Patients will also be given regular tests to see if the tubes have improved their hearing. The first checkup is likely to take place 10 to 14 days following the procedure, with regular checkups to follow periodically.

Tubes usually remain in the ears for six to 18 months before falling out into the ear canal as the hole closes and the eardrum grows. Sometimes the tubes migrate out of the eardrum prematurely and may need to be replaced. It is natural for some mild discomfort or bloody drainage to occur at this time. If the tubes do not fall out within two to three years, surgery to remove them may be required.

Once tubes are removed from the eardrum, patients must occasionally be checked to ensure that fluid buildup has not resumed and that ear infections have not returned. Some patients will need to take antibiotics to prevent or treat infections and other complications.


Benefits And Risks With Myringotomy


Myringotomy has a high success rate. Patients generally experience restored hearing very quickly, and usually report decreased feelings of pressure and pain in the ears. Because the tubes clear fluid from the middle ear, the patient also may experience fewer ear infections.

Improved hearing is a major benefit of myringotomy in children. Children with decreased hearing are at risk for slower language development and increased risk of learning disabilities. Some patients who undergo a myringotomy procedure will experience minor complications.


Myringotomy also carries the typical risks associated with any surgery, such as bleeding and infection. Patients also may have a reaction to anesthesia, including breathing problems.

A Physician Should Be Contacted If Any Of The Following Occurs After A Myringotomy :