The largest cartilage (thyroid cartilage) of the larynx can be felt in the neck as the Adam's apple. (Figure 1) The larynx is almost cylindrical in shape and is made up of various segments of cartilage surrounded by fibrous membranes. The larynx contains the vocal cords (Figure 2), which are important for speech

The vocal folds, responsible for sound generation in speech and singing, are also located in the larynx. As air is exhaled past the vocal folds, they vibrate and produce the sounds heard in voiced speech.

If the larynx is removed, air can no longer pass from the lungs into the mouth. The connection between the mouth and the windpipe no longer exists. In order to allow air to get into the lungs, an new opening must be made in the front of the neck. The upper portion of the trachea (windpipe) is brought out to the front of the neck to create a permanent opening called a stoma.

When a Laryngoscopy patient inhales, air passes directly through the stoma into the trachea and then into the lungs. The connection between the mouth and the esophagus is usually not affected, so food and liquid can be swallowed just as they were before the operation. Removal of the vocal cords means that a laryngectomy patient will no longer have laryngeal speech. This does not mean that speech is lost, as there are ways to talk without a larynx.

The operation itself is done through an incision in the neck. Many times a operation called a neck dissection is done at the same time to remove lymph nodes in the neck that may be involved with cancer. 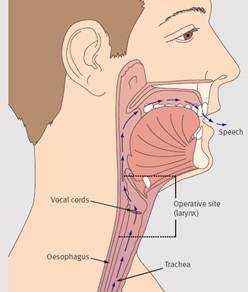 What To Expect Immediately After A Laryngectomy ?

The first couple nights after a laryngectomy are usually spent in the intensive care unit (ICU). As with most other operations for head and neck cancer, the patient will have one or more suction drains under the skin to collect any small amount of fluid collection in the neck. The drains are removed after several days. There also will be intravenous lines (IVs) in order to give fluids and medicine.

While the lower portion of the throat is healing after a laryngectomy, the patient will not be able to swallow food or liquids. In order to supply nutrition, a small flexible plastic feeding tube will be usually placed into the stomach through the nose. If all goes well, the patient will be able to start swallowing about one week after the operation, and the feeding tube can be removed at that time.

In some cases a tracheotomy tube is placed into the stoma after the operation. However, this is usually done on a temporary basis until the stoma will stay open on its own. Total hospital stay after a laryngectomy is usually about a week. 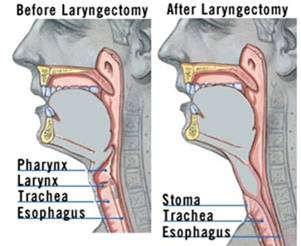 After a total laryngectomy, you will not be able to speak using your vocal cords. However, there are several options for restoring speech after total laryngectomy. Losing your voice box to cancer no longer means losing your ability to talk. Learning to speak again will take time and effort. You will need to see a speech therapist who is trained in the rehabilitation of people who have had a laryngectomy. The speech therapist will play a major role in helping you to learn to speak.

After a laryngectomy, your windpipe (or trachea) has been separated from the mouth and food pipe, and therefore, you can no longer expel air from the lungs through your mouth to speak. With training, some patients can swallow air and force it through their mouth. As the air passes through the throat it will cause vibrations which, with training, people can turn into speech. This is the most basic form of speech rehabilitation. With the advent of new devices and surgical techniques, learning esophageal speech is often not necessary.

This is the most common way that surgeons try to restore speech. TEP is done either at the time of surgery or later. This procedure creates a connection between the windpipe and food pipe through a small puncture at the stoma site. A small one-way shunt valve placed into this puncture restores your ability to force air from the lungs into the mouth. After this operation, you can cover your stoma with a finger to force air out of your mouth, producing sustained speech. This takes practice, but after surgery you can work closely with speech pathologists to learn this technique.

If you cannot have a TEP because of certain medical reasons, or while you are learning to use your TEP voice, you may use electrical devices to produce a mechanical voice. These battery-operated devices are either placed in the corner of the mouth or against the skin of the neck. When you press a button on the device, it will make a vibrating sound. By moving your mouth and tongue, you can form this sound into words. You will need training with a speech therapist to learn to use it properly.


Having a stoma instead of a larynx means that the air you breathe in and out will not pass through your nose or mouth. As air passes through the nose or mouth, it is humidified, warmed, and filtered (dust and other particles are removed). After a laryngectomy and tracheostomy, the air reaching the lungs will be dryer and cooler. This may irritate the lining of the breathing tubes and cause thick or crusty mucus to accumulate.

For this reason, you should learn how to take care of your stoma (periodic suctioning, cleaning, and use of a humidifier). Your doctors, nurses, and other health care professionals can teach you how to care for and protect your stoma, which includes precautions to keep water or small particles from falling into the windpipe. Support groups formed by other patients who have also had a laryngectomy can provide essential information on stoma care and use of products for protecting and cleaning the stoma