The stomach is part of the digestive system. It is a hollow organ in the upper abdomen, under the ribs.

The wall of the stomach has five layers : -
Food moves from the mouth through the esophagus to reach the stomach. In the stomach, the food becomes liquid. The liquid then moves into the small intestine, where it is digested even more.

Cancer begins in cells, the building blocks that make up tissues. Tissues make up the organs of the body.

Normally, cells grow and divide to form new cells as the body needs them. When cells grow old, they die, and new cells take their place.

Sometimes, this orderly process goes wrong. New cells form when the body does not need them, and old cells do not die when they should. These extra cells can form a mass of tissue called a growth or tumor.

Tumors can be benign or malignant: - 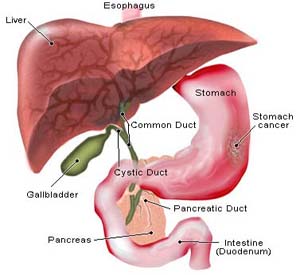 Stomach cancer can affect nearby organs and lymph nodes: -

Over most of the century, the frequency of gastric cancer has been decreasing. Over the past several years, the number of new cases of gastric cancer in the United States seems to be steady, while the number of deaths has greatly decreased. There has continued to be a decrease in cancer arising in the part of the stomach that is closest to the duodenum (the first part of the small intestine). However, cancer at the junction between the esophagus and stomach is on the increase.

Gastric cancer can sometimes be associated with known risk factors for the disease. Many risk factors are modifiable though not all can be avoided.

Early stomach cancer often does not cause clear symptoms. As the cancer grows, the most common symptoms are: -
Most often, these symptoms are not due to cancer. Other health problems, such as an ulcer or infection, can cause the same symptoms. Anyone with these symptoms should tell the doctor so that problems can be found and treated as early as possible.

If you have a symptom that suggests stomach cancer, your doctor must find out whether it is really due to cancer or to some other cause. Your doctor may refer you to a gastroenterologist, a doctor whose specialty is diagnosing and treating digestive problems.

The doctor asks about your personal and family health history. You may have blood or other lab tests. You also may have: -

The treatment of stomach cancer depends on the results of tests and your overall health.