Most brain tumours are named after the type of cells from which they develop. Medulloblastomas are malignant tumours formed from poorly developed cells at a very early stage of their life. They develop in the cerebellum (see diagram below), in a part of the brain called the posterior fossa, but may spread to other parts of the brain.

Medulloblastomas are more common in children, particularly between the ages of three and eight. They make up about one in five (20%) of all childhood brain tumours. The tumour is more common in boys than girls. They can also occur in adults, but this is extremely rare. 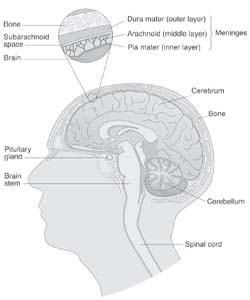 Causes of a medulloblastoma

As with most brain tumours, the cause of medulloblastoma is unknown. Researchers are continuing to work at finding possible causes.

The first symptoms of any brain tumour are usually due to increased pressure within the skull (raised intracranial pressure). This may be caused by a blockage in the ventricles (fluid-filled spaces in the brain), which leads to a build-up of CSF, or by swelling around the tumour itself.

The following are the most common symptoms of a medulloblastoma, however each child may experience symptoms differently. Medulloblastomas have a peak incidence between the ages of 3 and 8 but can be seen anywhere from the newborn/infant up into adulthood.


Common symptoms may include: -
The duration of these symptoms is relatively short, up to several weeks, and often children are diagnosed with the "flu" or a viral illness.

The symptoms of a brain tumor may resemble other conditions or medical problems. Always consult your child's physician for a diagnosis.

The treatment for medulloblastoma depends on a number of factors, including your child's general health and the size and position of the tumour. The results of the tests will enable the doctor to decide on the best type of treatment.

There are some risks associated with treatment to the brain and the doctor will discuss these with you.

Radiotherapy treatment is the use of high-energy rays to destroy the cancer cells and is commonly used after surgery to destroy any remaining malignant cells. As medulloblastoma may spread through the CSF to the spinal cord, radiotherapy is given to the brain and spinal cord.