Endometrial cancer is a cancer that starts in the endometrium, the inner lining of the uterus (womb). The picture below shows where the uterus is located. 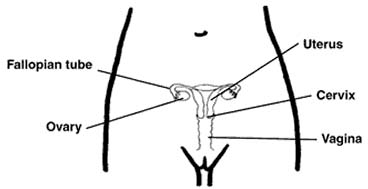 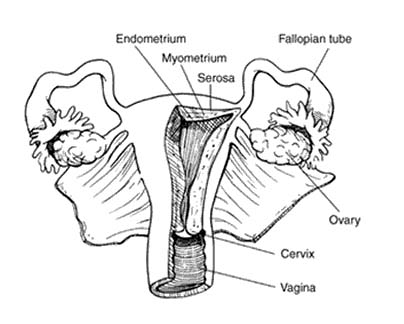 About the uterus and endometrium

Hormone changes during a woman's menstrual cycle cause the endometrium to change. During the early part of the cycle, before the ovaries release an egg (ovulation), the ovaries produce estrogens. The hormone called estrogen causes the endometrium to thicken so that it could nourish an embryo if pregnancy occurs. If there is no pregnancy, estrogen is produced in lower amounts and more of the hormone called progesterone is made after ovulation. This causes the innermost layer of the lining to prepare to shed. By the end of the cycle, the endometrial lining is shed from the uterus and becomes the menstrual flow (period). This cycle repeats throughout a woman's life until menopause (change of life).

When the balance of these two hormones shifts toward more estrogen — which stimulates growth of the endometrium — a woman's risk of developing endometrial cancer increases.

Factors that increase levels of estrogen in the body include: -

Other factors that can increase your risk of endometrial cancer include: -

Hormone therapy used to be widely regarded as a very safe treatment for menopause. However, several major studies have shown that hormone therapy creates risks for certain medical conditions and problems, including heart disease, stroke, and cancer.

However, hormone therapy may help relieve some of the bothersome symptoms of menopause, such as hot flashes, vaginal dryness and pain with intercourse, and long-term complications of estrogen loss, such as osteoporosis.

A woman's body produces less estrogen during and after menopause, which may affect her bone strength. Hormone therapy may also prevent the development of osteoporosis. For information on treating bone loss, see: Osteoporosis.